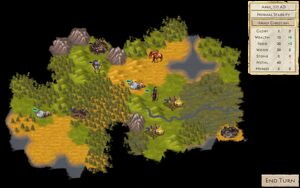 You need to be constantly on the hunt for more food and wealth to keep your army in the field. One tool at your disposal is the ability to move your settlements around the map. Instead of remaining fixed to one part of the map forever, your kingdom and its identity will evolve over time! The best option available will often be to leave your current home behind for greener pastures.

Even if you remain on the move there will be times where you’ll be asked to make difficult choices about how to spend your limited resources. Constructing new improvements is expensive, so the primary means of boosting your economy is stealing from your neighbors. Hard fought success grants you the luxury of watching your rivals wither as your own empire remains happy and well-fed!

Settlements and improvements can either be captured for long-term benefits or pillaged and destroyed for short-term payouts. The latter is usually your best option only when you absolutely need the loot to pay off an approaching Vandal horde. However, improvements burned in this manner can be destroyed forever, so before you actually torch that iron mine make certain that you won’t need it later!

There will be times when juicy, undefended targets belonging to the distracted Romans are almost too much to ignore – but doing so risks awakening a sleeping giant. In this era the Roman Empire is down, but she’s certainly not yet out. A better strategy might be to lie in wait, slowly building up your strength until the time is right. It all depends on the particular situation you find yourself in.